In the United States, there are increasing levels of protection for various animals, based roughly on how close they are to humans. See a general illustration (PDF - 148KB).

The greatest impact on animal subjects comes from the U.S. Principles, the Animal Welfare Act, and the PHS Policy, as interpreted by implementing regulations and the Guide published by the National Academies of Science. The Guide is the basis for inspection by the Association for Assessment and Accreditation of Laboratory Animal Care (AAALAC), which remains the only private organization authorized to perform voluntary compliance inspections of animal research facilities.

Prior to the Animal Welfare Act policies protecting animal research subjects had been developed and published independently by scientists and others in the laboratory animal community. The documents listed below are those currently in effect. 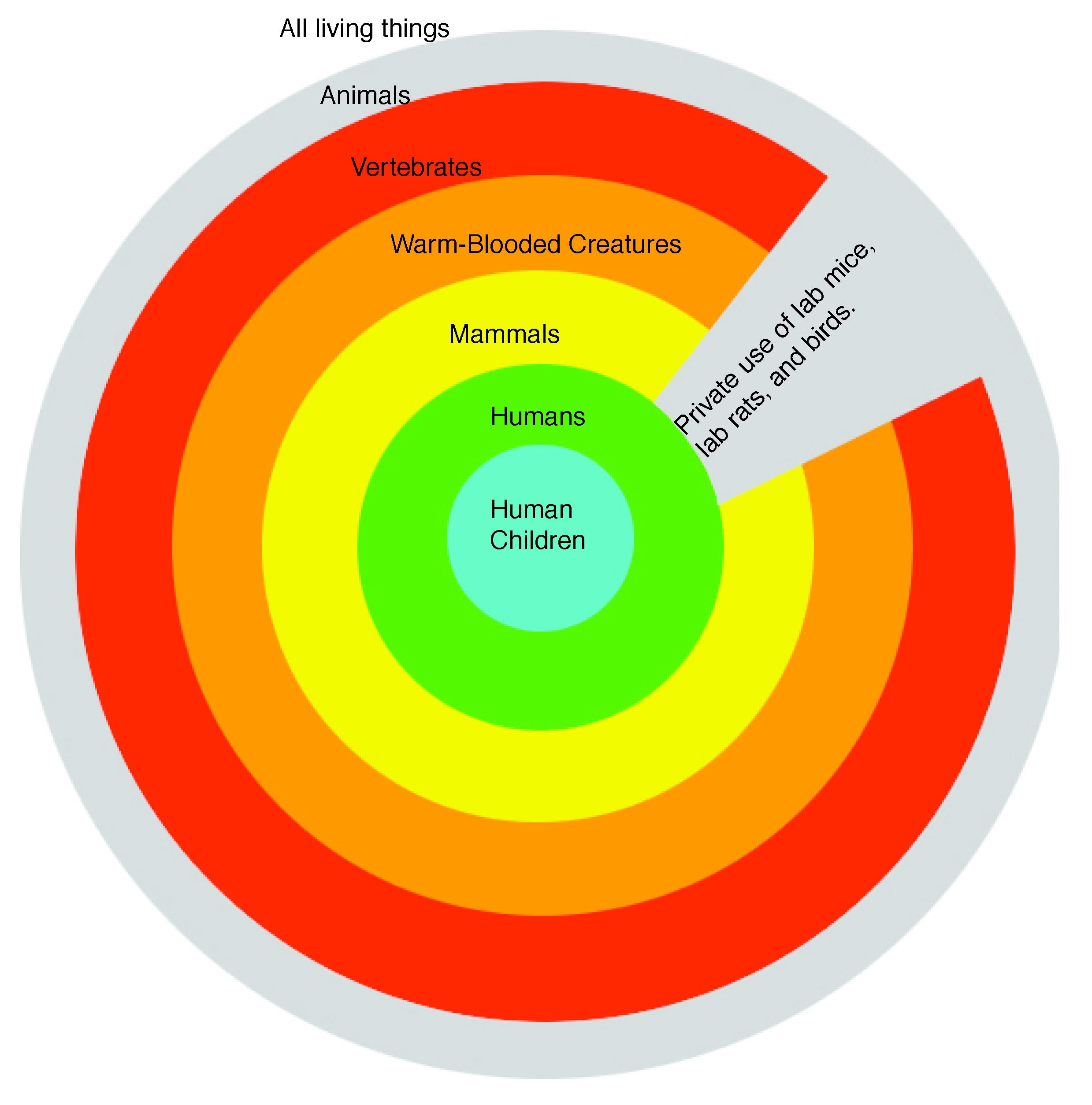 Statement by NIH Director Dr. Francis Collins on the Institute of Medicine report addressing the scientific need for the use of chimpanzees in research

The use of animals in research has enabled scientists to identify new ways to treat illness, extend life, and improve health and well-being. Chimpanzees are our closest relatives in the animal kingdom, providing exceptional insights into human biology and the need for special consideration and respect.  While used very selectively and in limited numbers for medical research, chimpanzees have served an important role in advancing human health in the past. However, new methods and technologies developed by the biomedical community have provided alternatives to the use of chimpanzees in several areas of research.  In December 2010, the National Institutes of Health commissioned a study by the Institute of Medicine to assess whether chimpanzees are or will be necessary for biomedical and behavioral research.  The IOM now has issued its findings, with a primary recommendation that the use of chimpanzees in research be guided by a set of principles and criteria. The committee proposed three principles to analyze current and potential future research using chimpanzees.

Based on its deliberations, the IOM committee concluded that “while the chimpanzee has been a valuable animal model in past research, most current use of chimpanzees for biomedical research is unnecessary.” The committee also concluded, however, that the following areas may continue to require the use of chimpanzees: some ongoing research on monoclonal antibody therapies, research on comparative genomics, and non-invasive studies of social and behavioral factors that affect the development, prevention, or treatment of disease.  The committee was unable to reach consensus on the necessity of the chimpanzee for the development of prophylactic hepatitis C virus vaccine. While the committee encouraged NIH to continue development of non-chimpanzee models and technologies, it acknowledged that new, emerging, or re-emerging diseases may present challenges that may require the use of chimpanzees. I have considered the report carefully and have decided to accept the IOM committee recommendations.  NIH is in the process of developing a complete plan for implementation of the IOM’s guiding principles and criteria. I will be assembling a working group within the NIH Council of Councils to provide advice on the implementation of the recommendations, and to consider the size and placement of the active and inactive populations of NIH-owned or -supported chimpanzees. We will not issue any new awards for research involving chimpanzees until processes for implementing the recommendations are in place. NIH is committed to conducting and supporting high-quality science in the interest of advancing public health, and to the humane care and use of animals used in NIH research. I am grateful to the IOM for their careful and thoughtful assessment of this important and sensitive topic.

ENFORCEMENT: The U.S. Principles are implemented and supplemented by the PHS Policy.

PROVISIONS: Seeks to minimize the number of animals used and the pain and distress inflicted, consistent with scientific necessity. Incorporates the Animal Welfare Act; refers to the Guide for the Care and Use of Laboratory Animals.

RESEARCH AFFECTED: Commercial sale, research use, transportation, or zoological exhibition of animals. Implementing regulations of the Animal Welfare Act are found in 9 CFR 1(A) parts 1, 2 and 3. These regulations are administered by the U.S. Department of Agriculture and include special provisions for many species, diseases, and situations, such as scrapie in sheep and swim-with-the-dolphin programs.

ENFORCEMENT: By the Animal and Plant Health Inspection Service of the USDA (APHIS). The Act requires licensing and registration of all affected businesses and research facilities. APHIS performs unannounced inspections at least once a year. APHIS can set civil penalties for infractions, issue cease-and-desist orders, impose fines, and suspend or revoke licenses.

PROVISIONS: Creates general standards, as well as specific standards for individual species such as dogs, cats, horses, marine mammals, and primates. APHIS is not permitted to interfere with research, although research facilities are regulated by the AWA. In effect, this means that pain and distress imposed by research, within the limits permitted by other authority, are not actionable violations of the AWA's standards. The AWA also requires each research facility to establish an Institutional Animal Care and Use Committee (IACUC). Each IACUC is required to submit an annual Animal Welfare Assurance, including statistics on animal use at that facility. Information for IACUCs is at http://www.iacuc.org.

Implementing regulations of the AWA.

The HREA directs the Secretary of Health and Human Services, through the Director of NIH, to create guidelines for the care and treatment of animals used in research. The result was the PHS Policy.

ANIMALS PROTECTED: Live vertebrates used or intended for use in research, research training, experimentation, or biological testing or for related purposes. Note that this includes breeding of animals for later use, as well as birds, mice and rats.

RESEARCH AFFECTED: All research, research training, or biological testing activities involving animals, conducted or supported by PHS (including NIH, FDA, CDC, and others).

ENFORCEMENT: OLAW requires an Assurance of compliance with the Policy before any activities can be undertaken by PHS or with PHS support. In effect, the Policy requires all grant recipients to comply with the U.S. Principles, the AWA, and the Guide.

PROVISIONS: The Policy endorses the U.S. Principles and requires compliance with both the AWA and the Guide, at a minimum.

In addition to the Assurance, the institution must establish an Institutional Animal Care and Use Committee (IACUC), which conducts reviews, inspections, and reports every six months, using the Guide. Once a year, the IACUC must make a report to OLAW.

KEY QUOTE: “PHS awarding units may not make an award for an activity involving animals unless the prospective awardee institution and all other participating institutions have approved Assurances on file with OLAW, and the awardee institution has provided verification of approval by the IACUC of those components of the application or proposal related to the care and use of animals.”

Guide to the Care and Use of Laboratory Animals ("the Guide")

Originally published 1963, with support from NIH, as "Guide for Laboratory Animal Facilities and Care"; last revision 2011, National Academy of Sciences. The Guide endorses the U.S. Principles and, in its post-1985 form, the PHS Policy. The Guide does not have the force of law or regulation; facilities can deviate from its guidelines for scientific reasons. However, the Guide serves as a standard.

ANIMALS PROTECTED: Vertebrates, including traditional laboratory animals, farm animals, wildlife, and aquatic animals. Note that the Guide does cover birds, mice, and rats, unlike the AWA as modified.

EXCEPTIONS: When appropriate, exceptions or specific emphases for farm animals are provided. The Guide does not specifically address farm animals used in agricultural research or teaching, wildlife and aquatic animals studied in natural settings, or invertebrate animals used in research; however, many of the general principles apply.

RESEARCH AFFECTED: All use of animals in research, teaching, or testing.

ENFORCEMENT: Via the grant-making process. The PHS Policy requires institutions to use the Guide as the basis for their programs.

PROVISIONS: Very specific standards in: justification of the species and number of animals; availability of less-invasive procedures or alternatives; training and experience of personnel; housing and husbandry requirements; sedation, analgesia, and anesthesia; unnecessary duplication of experiments; multiple major operative procedures; intervention, removal from study, or euthanasia; postprocedure care; method of euthanasia or disposition of animal; safety of working environment for personnel.

KEY QUOTES: “All who care for or use animals in research, teaching, or testing must assume responsibility for their well-being;" "The Guide charges users of research animals with the responsibility of achieving specified outcomes but leaves it up to them how to accomplish these goals.”

Requires creation of a Plan for Use of Animals in Research at NIH. View the current plan.

RESEARCH AFFECTED: Nonclinical studies (safety data) in support of applications to the FDA for food or drug research or marketing permits.

Empowered the Interagency Committee on the Validation of Alternative Methods (ICCVAM) to review federal and federally-funded toxicology testing for possible reduction of animal use. ICCVAM was created in the National Institute of Environmental Health Sciences (NIEHS) at NIH.

Clarifies the roles of the three agencies:

Primary enforcement of the AWA falls to the Animal and Plant Health Inspection Service (APHIS) of the USDA.

The FDA inspects for voluntary compliance with the Good Laboratory Practice Regulations.

The NIH Office of Laboratory Animal Welfare (OLAW) is responsible for administration of the PHS Policy.

The Farm Security and Rural Investment Act of 2002 (Farm Act) modified the AWA's definition of animals to exclude rats, mice and birds used in biomedical and behavioral research.

Agreement to share information and avoid redundant effort in monitoring research at or sponsored by the Veterans Administration. Authority to implement the PHS Policy remains with OLAW.

In the case of some species, protections adminstered by the Department of the Interior may apply.