An abacus used at the NIH? Yes, by Dr. Wallace P. Rowe of the National Institute of Allergy and Infectious Diseases (NIAID). According to Dr. Janet Harley (NIAID), Rowe used this abacus for many years “in making rapid calculations for data analysis—before and even after hand calculators were readily available.” His use of this calculation aid is of interest because many of Rowe’s research contributions had important and fairly sophisticated mathematical aspects. Rowe (1926–1983), chief of NIAID’s Laboratory of Viral Disease, was the first to isolate an adenovirus from patients, and he helped to clarify its role in respiratory disease. Adenoviruses mainly cause respiratory illnesses but can also cause other infections such as pink eye (conjunctivitis). They get their name from the human organ they were isolated from: adenoids. Rowe also described the epidemiology and clinical characteristics of these infections. Learn more about how an abacus works at https://www.youtube.com/watch?v=CvsnftXXKdw.
[01.0010.002] 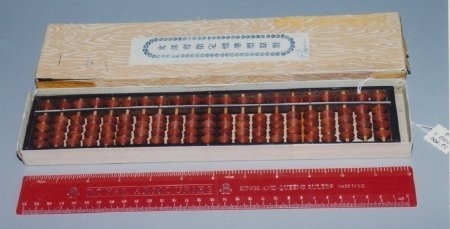 This slide rule was “especially designed for the Merchant, Importer, Exporter, Accountant, Manager, Mechanic, Foreman, and others, whose computations involve only multiplication, division, proportion, and percentage.” (Keuffel & Esser Co. Catalogue, 38th Edition, 1936) This model includes DF, CF, CI, C, and D scales. Dr. Robert L. Berger, who owned this rule, began his career at the NIH in 1962 in the Laboratory of Technical Development, NHLBI. Over the course of 40 years, Berger developed a number of instruments used by scientists at the NIH. He holds two U.S. patents: the first in 1988 for the computer-controlled all-tantalum stopped-flow micro calorimeter; and the second in 1992 for the high-resolution digital thermometer. This thermometer could measure temperature differences to several micro-degrees centigrade and is a forerunner of the digital thermometers used today for cooking and taking temperatures. This slide rule is one of several belonging to Berger in the NIH Stetten Museum collection. See also 05.0014.003, Eugene Dietzgen Co. Midget Slide Rule and06.0005.001 Eugene Dietzgen Co. The Binary Slide Rule.
[95.0006.003] 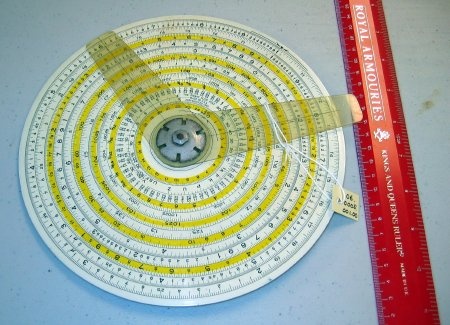 A circular slide rule eliminates the problem of calculations running off the scale, as the scale has no end. This slide rule is one of the commonly used 6-inch slide rules, equivalent to a 14-inch straight slide rule in calculation power. John R. Dempster of Berkeley, California, filed the first patent filed for a circular slide rule on April 30, 1928; the patent was issued on March 15, 1932. This rule belonged to Dr. Wallace P. Rowe, chief of the Laboratory of Viral Diseases at the National Institute of Allergy and Infectious Diseases. He was the first to isolate an adenovirus from patients and helped to clarify its role in respiratory disease. Adenoviruses mainly cause respiratory illnesses but can also cause other infections such as pink eye (conjunctivitis). They get their name from the human organ they were isolated from: adenoids. Rowe also described the epidemiology and clinical characteristics of these infections.
[01.0010.001] 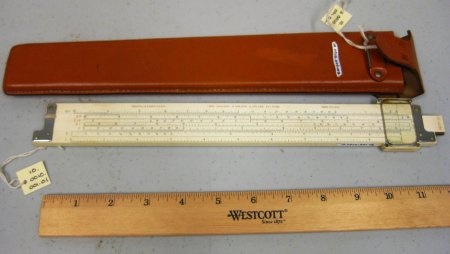 This mahogany wood 10” slide rule with scales on the front (K, A, B, T, ST, S, D, and DI) and back (DF, CF, CIF, CI, C, D, and L) was more expensive than the plastic, one-sided models. Keuffel & Esser produced this model from 1939 to 1955. This slide rule belonged to Dr. Harry Blum, a mathematician who worked at the NIH Laboratory of Statistical and Mathematical Methodology in the Division of Computer Research and Technology from 1967 to 1982. During his career, Blum collaborated on a variety of projects involving the use of biologic measurements to create formulas for shape modeling; one such project focused on invariant shapes found in adult mandibles and their use in analyzing genetic and environmental differences in growing lab mice.
[10.0010.001]

The 4081 family of slide rules were the most lucrative products for Keuffel & Esser from the 1940s to 1960s. The 4081-3, shown here, has extended trigonometric scales with decimal divisions, and it was manufactured some time after 1953. It is made of wood and glass, rather than plastic, which would soon become ubiquitous. This slide rule was used by Dr. Michael Potter (1924–2013), who won the Lasker Award for medical research for his work on understanding tumors and the immune system. He worked for over 50 years at the NIH National Cancer Institute, studying how tumors in plasma cells, called plasmacytomas, are produced, and developed strains of mice still used in research around the world.
[13.0017.001] 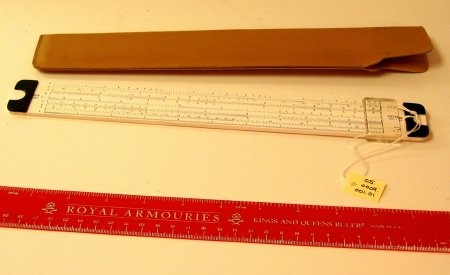 Far from being a glorified ruler, this plastic slide rule, produced by Dietzgen Co. between 1955 and 1959, was used by Dr. Julius Axelrod of the NIH National Institute of Mental Health (NIMH) to analyze the data from his seminal experiments on neurotransmitter re-uptake. Before electronic calculators became available in the early 1970s, scientists used slide rules to accurately make complex calculations. Several slide rules with the number 1767 were made by Dietzgen: this one was named “National” and had K, S, A, B, CI, C, D, T, and L scales on its one printed side to calculate single logarithms and trigonometric and exponential functions, as well as the basic arithmetic functions. Axelrod (1912–2004) is probably best known for his research in the early 1960s on brain chemistry, which has become fundamental to our understanding of depression and anxiety disorders. His research described the “re-uptake” mechanism in brain cells, which regulates the levels of neurotransmitters available for communication between neurons; in fact, Axelrod coined the phrase “re-uptake inhibitor.” His findings led to the development of the modern antidepressant medications called Selective Serotonin Reuptake Inhibitors (SSRIs) and to a 1970 Nobel Prize in Physiology or Medicine for Axelrod, which he shared with two other researchers.
[05.0009.001] 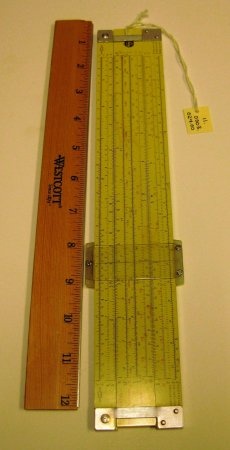 The “ES” in this slide rule’s model number means “eye saver yellow” and the “N” means “new,” with an improved cursor design and square corners. In addition to exponential, trigonometric, and square root scales, it also had double logarithmic and natural log scales. Pickett Inc. dropped the Eckel name in 1949–50, but the logo dates from 1958–1962, so the date of this slide rule is uncertain. Marketing research enabled Pickett Inc. to target slide rules to particular demographics based on the number of scales and price. Because this rule was one of the most expensive that the company sold, it was clearly intended for use by skilled professionals. Indeed, this slide rule was used by Dr. Joseph E. Rall (1920–2008), who served as scientific director of NIAMD and NIDDK before becoming the first deputy director of NIH Intramural Research. For more about Rall, read the NIH Catalyst article. [11.0003.024] 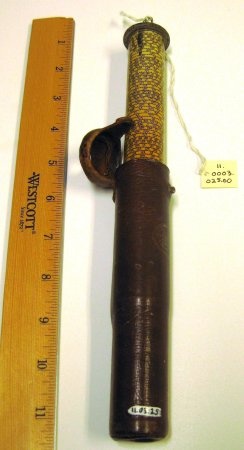 Patented in 1921 by Otis Carter Formby King, a grocer, this “calculator” was equivalent to a 66-inch slide rule, but due to its cylindrical design, it was both more accurate and more compact than a normal slide rule. Otis King’s calculator was produced well into the 1970s, when it was sold alongside new electronic calculators at a fraction of the price. This rule belonged to Dr. Joseph Rall (1920-2008), who served as Scientific Director of NIAMD and NIDDK before becoming the first NIH Deputy Director of Intramural Research. Intriguingly, Rall’s case is labeled “James” and “Annanias Club”. While we do not know whom James was or his significance to Rall, “Annanias Club” is a likely misspelling of Ananias Club, based on the New Testament story of Ananias, who lied about how much money he received for selling property and held some of the profit back for himself. He dropped dead upon being revealed in his lie. The term got much press use in 1906–07 during Theodore Roosevelt’s heated presidential campaign, and Ananias clubs were established nationwide. How this term came to be inscribed on the case of an instrument which began production in 1921 and was used in the 1950s and 1960s is unknown—perhaps it was given to Rall by an older mentor.
[11.0003.025] 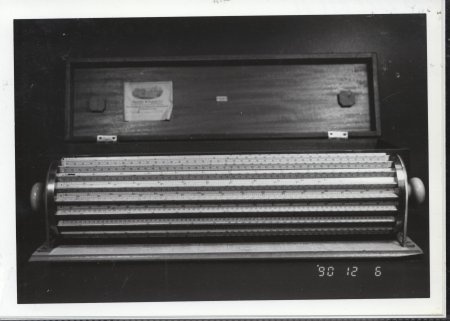 Dr. Makio Murayama, who discovered the first effective treatment for sickle cell anemia here at the NIH, rescued this cylindrical slide rule from among discards in NIH Surplus. It is one of the most sophisticated developments of the slide rule. This cylindrical slide rule has two complete logarithmic scales, as well as scales for square roots, squares, and basic arithmetic functions, but no trigonometric scales. It is made up of twenty triangular wedges. When the slide is moved to match the wedges, normal slide rule operations are available with great accuracy (to four figures). Edwin Thacher patented this design in 1881, but by 1897, Keuffel and Esser had taken over production of the instrument.
[89.0001.011] 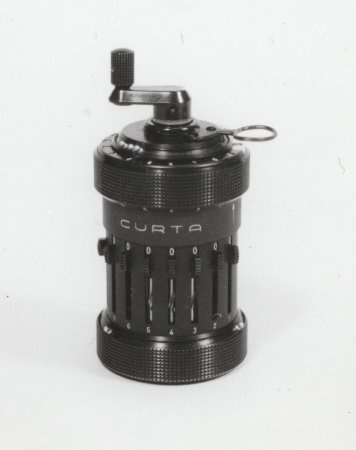 Designed by Curt Herzstark while he was a prisoner in a concentration camp during World War II, and produced in Liechtenstein, a country noted for its precision mechanical instruments, this Curta calculating machine is a mechanical version of today’s electronic hand-held calculator. It could add, subtract, multiply, divide, find square roots, and perform statistical functions. Because it was easily portable and quiet when operating, it had an advantage over the motor-driven electric calculators then available.

This particular calculator belonged to Dr. DeWitt Stetten, Jr., founder of the NIH Stetten Museum. Stetten (1909–1990) is known for his work in diabetes and gout, and for being scientific director of the National Institute of Arthritic and Metabolic Diseases (NIAMD), director of the National Institute of General Medical Sciences (NIGMS), and deputy director for science of the entire NIH. In this position, he was also head of the Recombinant DNA Committee, helping to draft guidelines for the use the technology.
[89.0001.012]