It is impossible to list all of the discoveries made by NIH-supported investigators. More than eighty Nobel prizes have been awarded for NIH-supported research. Five of these prizes were awarded to investigators in the NIH intramural programs. The intramural discoveries have included deciphering the genetic code that governs all life processes, demonstrating how chemicals act to transmit electrical signals between nerve cells, and describing the relationship between the chemical composition of proteins and how they fold into biologically active conformations. In turn, these basic research discoveries have led to greater understanding of genetically based diseases, to better antidepressants, and to drugs specially designed to target proteins involved in particular disease processes. Long-term research has dispelled preconceptions that morbidity and dementia are a normal part of the aging process. Some cancers have been cured and deaths from heart attack and stroke have been significantly lowered. Research has also revealed that preventive strategies such as a balanced diet, an exercise program, and not smoking can reduce the need for therapeutic interventions and thus save money otherwise expended for health care.

In 1887, Dr. Joseph Kinyoun could hardly have imagined the size and scope of the NIH's present program. As a result of the numerous scientific opportunities and policy decisions that make up the historical fabric of the NIH, this premier medical research institution is poised to foster even more significant contributions to human health in the twenty-first century. 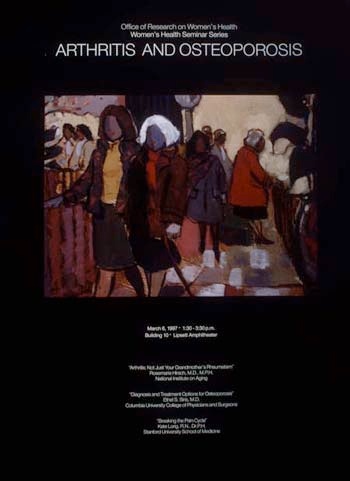 Poster for 1997 conference on arthritis and osteoporosis