FDR, the Wilsons, and the Naval Medical Center

Sometimes during a tour of the National Institutes of Health (NIH) campus, you will hear that President Franklin Delano Roosevelt (FDR) sat on the front porch of Luke and Helen Wilson's house and drew up the plans for the Naval Medical Center, which was later built across Rockville Pike.  You can just picture FDR in a rocking chair, passing the time with Luke and Helen, talking about medical research and the needs of the nation.  Roosevelt grabs a napkin and draws a plan for a hospital for the U.S. Navy.  The Navy needs a new hospital and what better place than this, right across the road from the NIH!

Did this really happen?  Or is this tale just a way for the NIH to insert itself into the creation story of the Naval Medical Center, now the Walter Reed National Military Medical Center? 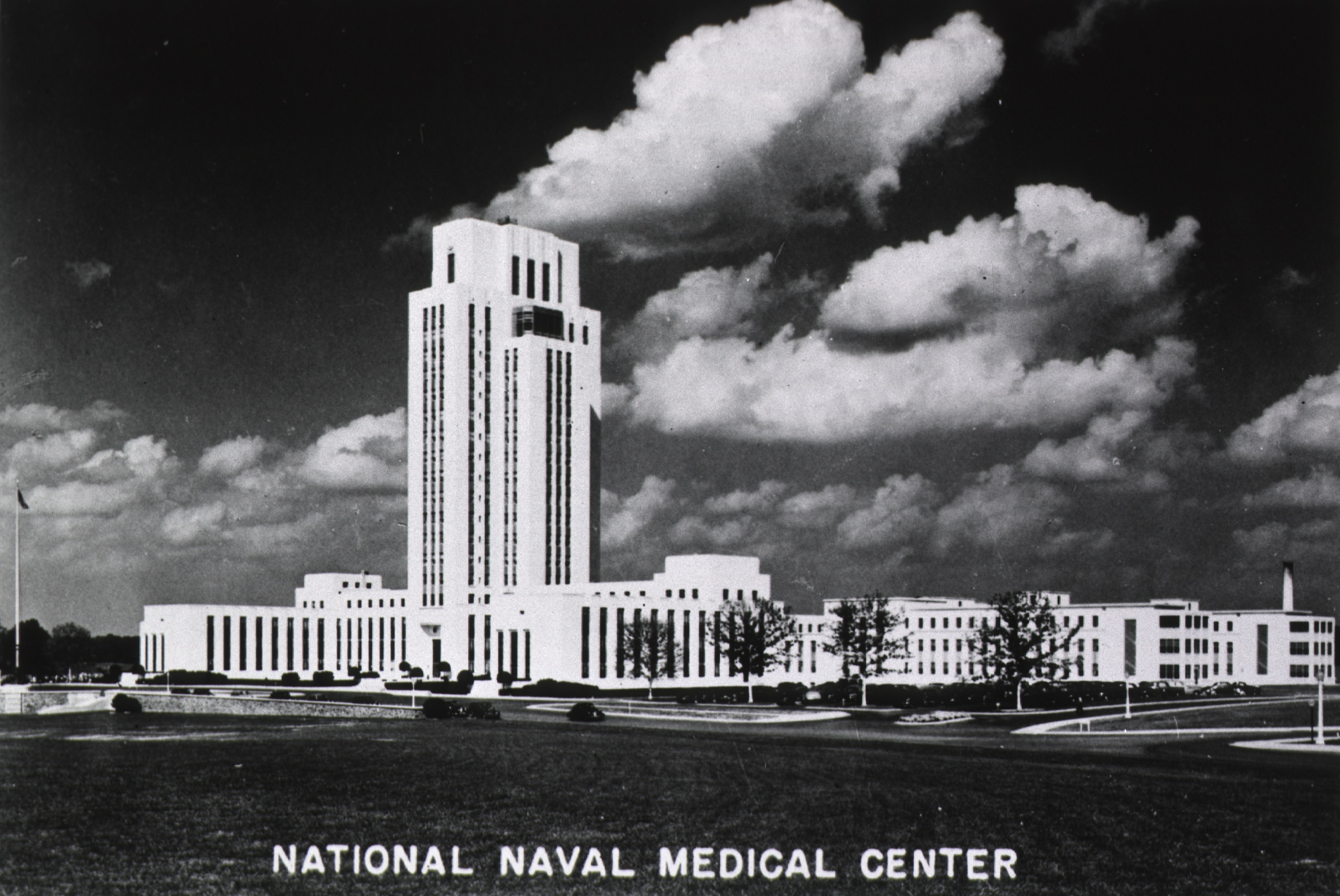 Courtesy of the U.S. National Library of Medicine.

The story is based on some facts. Beginning in the early 1930s, the U.S. Navy wanted to update and expand its hospital located at 25th and E Streets, NW in Washington, DC. The hospital shared the grounds of the U.S. Observatory along with the National Institute of Health (then still singular). When it became clear that events in Europe could lead the U.S. into war, the need for a replacement hospital got serious. Congress funded the construction of a new Naval Medical Center in 1937, and construction began in 1938. By 1940, the cornerstone was being laid.

Previously (1935), Luke and Helen Wilson had donated some of their Rockville Pike estate, called Tree Tops, to the U.S. government for the campus of the NIH. Construction on the first buildings began in January 1938. Luke Wilson was the son of a successful men’s clothing importer and manufacturer, who supervised the European imports of his family's firm, the Wilson Brothers. Helen Woodward was a daughter of one of the founders of Washington, D.C.’s Woodward and Lothrop department stores. Read their story. 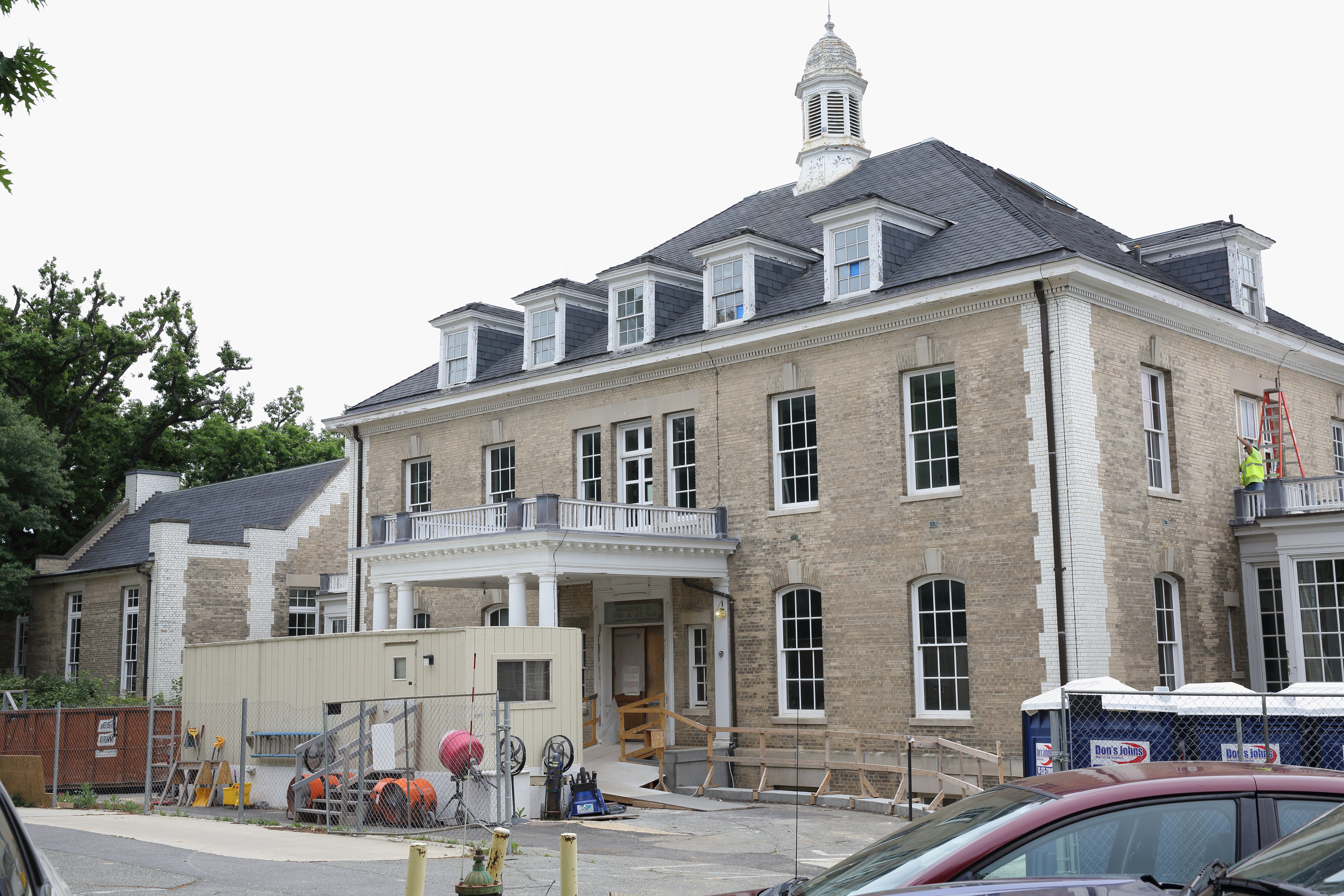 But he got the idea from the State Capitol building in Lincoln, Nebraska. New York architect Bertram Grosvenor Goodhue had designed the American Modernist building with a 400 foot high tower in the center. Wings extending from each of the four sides of the tower created a cross shape. Around this were four courtyards surrounded by building wings that made the whole footprint into a square.

On October 10, 1936, Roosevelt helped to dedicate the new building and was quite impressed by the structure. He said, “I have seen – in fact all the people of America have seen – photographs of this wonderful capitol building. Every one of them ought to come here and see it – a great structure, worthy of a great State.” These weren't just a politician's words; Roosevelt really did like the design of the building. He remembered it over a year later, when Congress finally funded the construction of a new Naval Medical Center.

The quote is from page 427, The Public Papers and Addresses of Franklin D. Roosevelt: Volume Five. 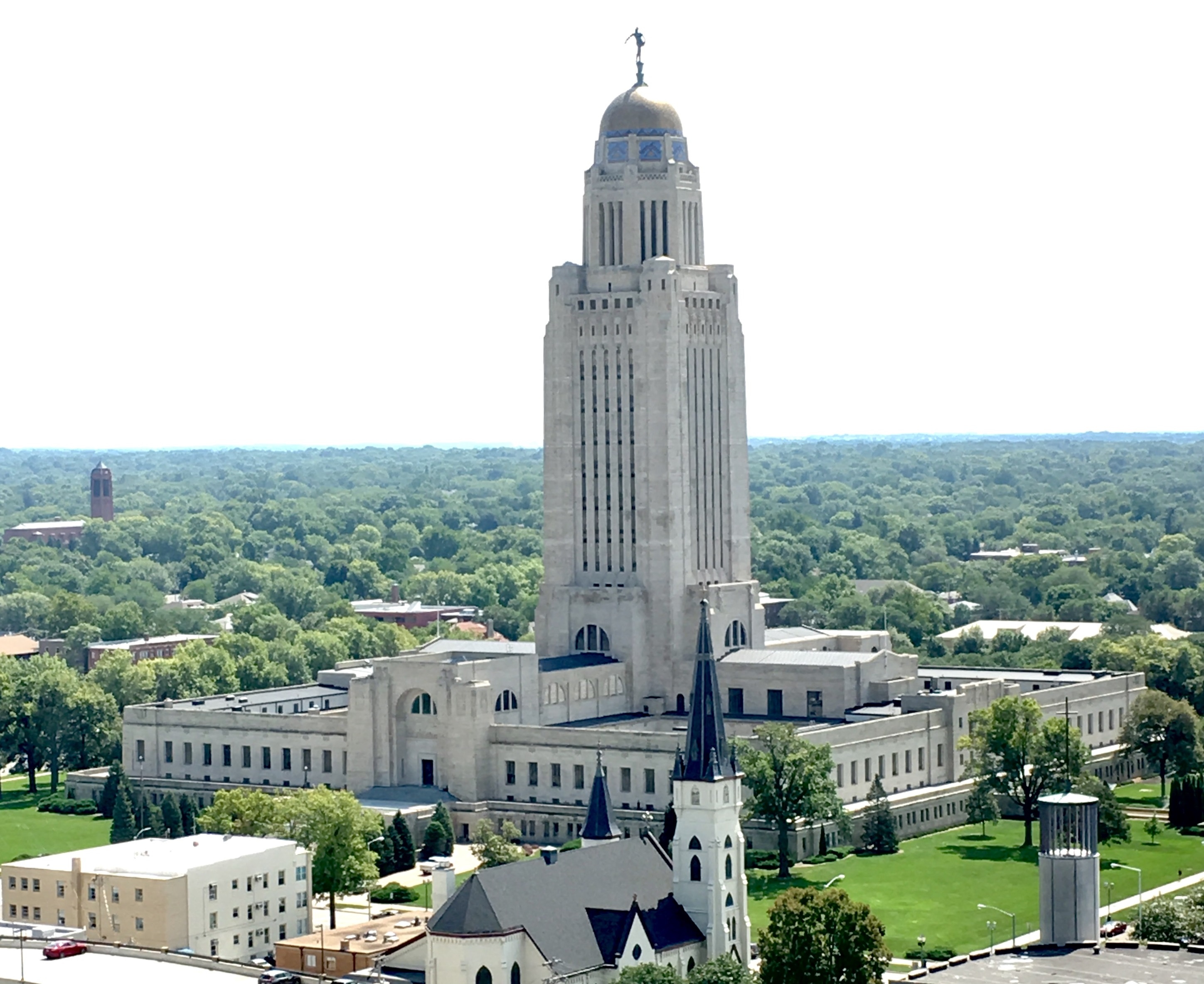 Most people don't realize how much influence FDR had on the built landscape of Washington, D.C. He loved the study of architecture, although he remained an amateur, and made contributions to the design of the Jefferson Memorial, National Airport, and the Pentagon, to name just a few projects. For the construction of the Naval Medical Center, he chose the material (exposed aggregate precast concrete panels instead of Indiana limestone), drew the elevation, and selected the site.  But he didn't draw the elevation on a napkin — he drew it on White House stationery, on December 13, 1937. His elevations are now in the National Archives and Records Administration collection. 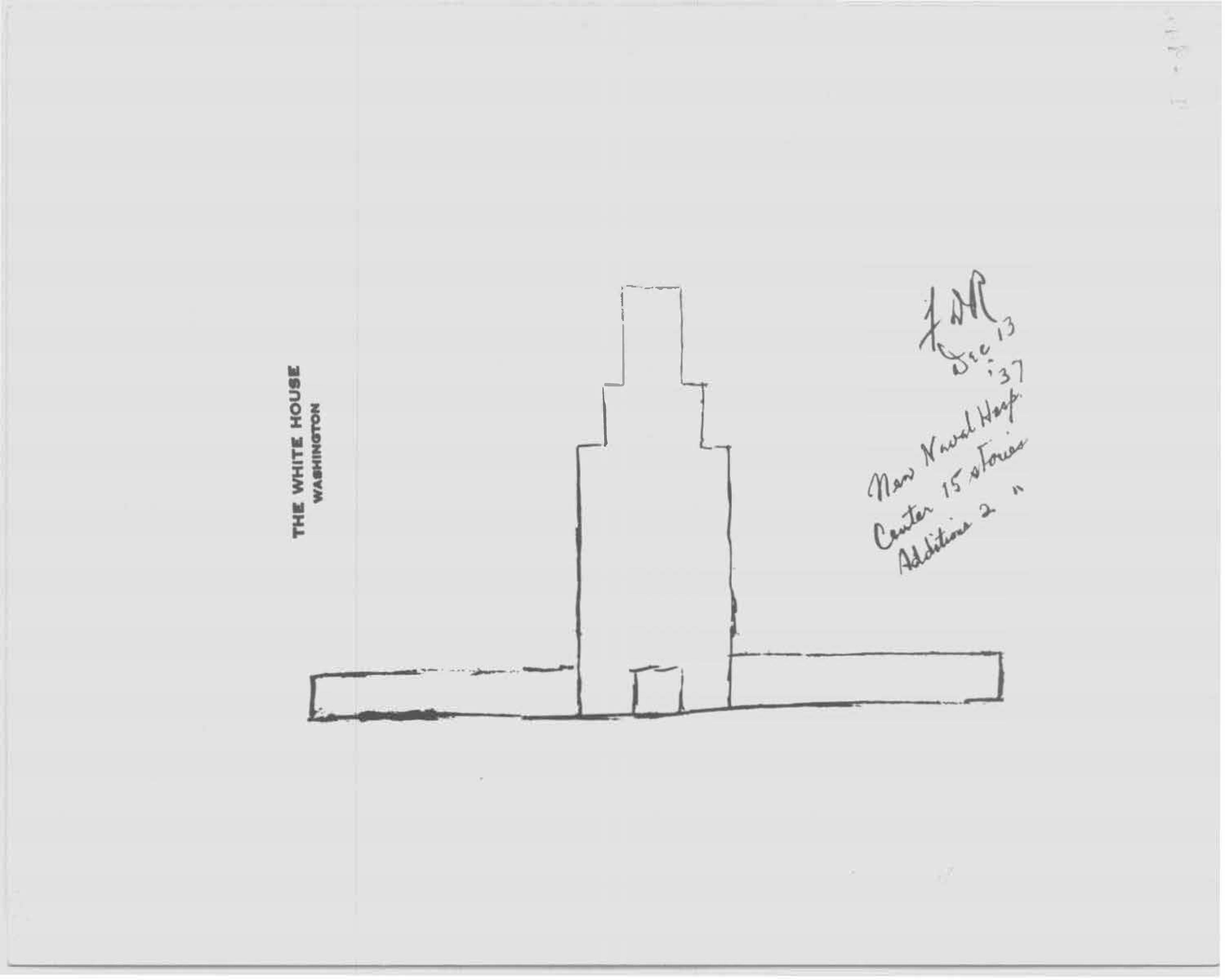 Downloaded from the National Archives and Records Administration site https://www.archives.gov/publications/prologue/2009/winter/tower.html 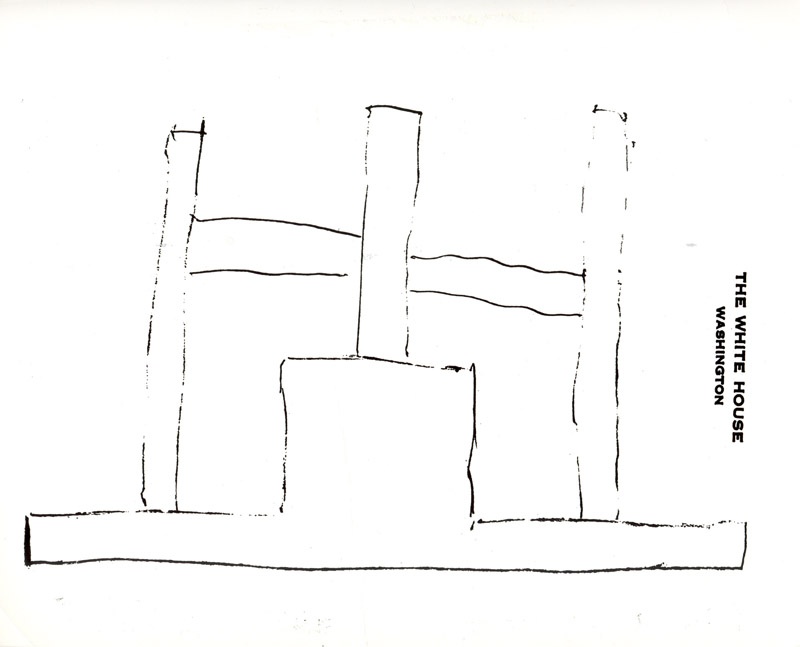 Downloaded from the National Archives and Records Administration site https://www.archives.gov/publications/prologue/2009/winter/tower.html

Not everyone in Washington, D.C. liked FDR's concept. Even his own uncle, Frederic A. Delano, who was on the National Planning Board, thought the building was too much. Its tower was higher than the Washington Monument, which was not allowed in the District. And even though the location was not in the District (more on that below), he thought the tower was a mistake. In a letter to Delano dated December 1, 1938, FDR defended his choice:

“The tower is of such great beauty of design that it will be a landmark for generations to come, in what will for generations to come remain a wooded area even if suburbs extend as far out as that…. I sometimes think of the English countryside.  As you well know, you can in so many places stand on top of a small hill and see expanses of woods and field for many miles with perhaps a low village or the roof of a country house, and at the same time one or two or three fairly high church towers—square towers generally—sticking up above the trees and the other buildings.  These towers lend a very distinct gain to the landscape.  If, six and eight and ten miles beyond the District line, a few—a very few—lovely towers could be seen, the views from high ground would be improved and not hurt.  In other words, I am staking my artistic sense against the opinion of some professionals!”

Did President Franklin Roosevelt choose the site of the Naval Medical Center?

FDR was particular about where buildings and monuments should be placed. He wanted to have a tall tower at the Naval Medical Center, and that would not be allowed inside the District of Columbia — but outside of the District was another story. Where, oh where, could it be located? Supposedly, 80 sites were considered. The one that won was a cabbage farm across Rockville Pike from the site where the new campus for the National Institute of Health (then singular) was being built on Luke and Helen Wilson's donated land. FDR is supposed to have poked his cane into the dirt when he saw it, saying, "We'll build it here."

Did that happen? What we do know for sure is that Roosevelt motored out with Surgeon General Percival Rossiter, his personal physician Vice Admiral Ross T. McIntire, Senator David I. Walsh, and Congressman Carl Vinson to visit several proposed sites on August 4, 1937. We know that thanks to the Franklin D. Roosevelt Day by Day, a project of the Pare Lorentz center at the FDR Presidential Library which uses the schedules kept by the White House Usher, the White House stenographer, and other diaries to show what happened on any day of his presidency.

On July 5, 1938, FDR's schedule once again has him motoring to see a proposed site, this time with just Rossiter and McIntire. This is when Roosevelt is said to have struck the ground and declared the lowly cabbage patch in Bethesda the best site for the Naval Medical Center. 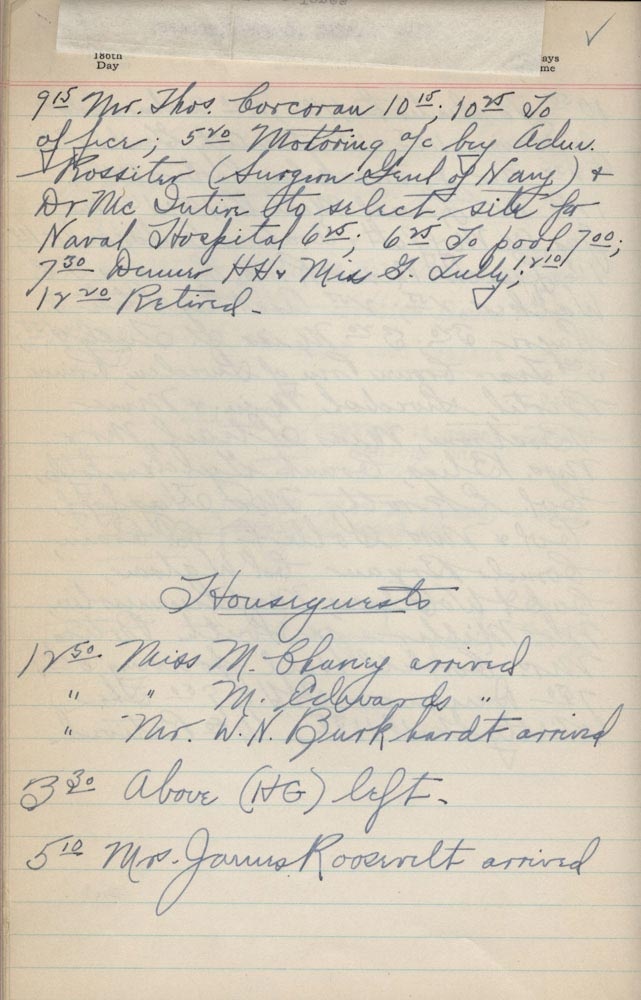 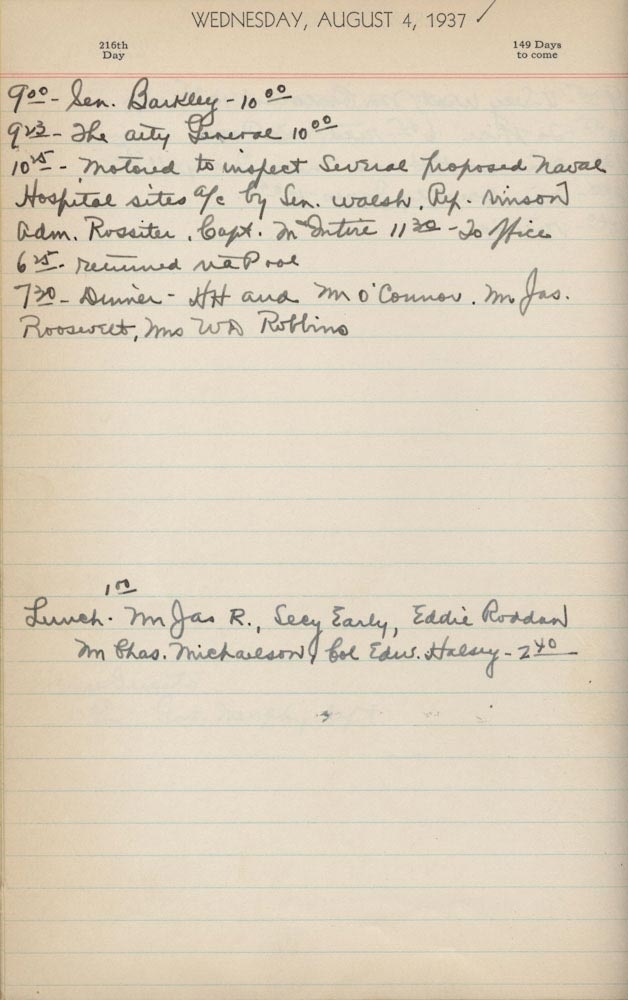 The August 4, 1937 schedule. From the Franklin D. Roosevelt Day by Day, a project of the Pare Lorentz center at the FDR Presidential Library. http://www.fdrlibrary.marist.edu/daybyday/daylog/august-4th-1937/

Did President Franklin Roosevelt ever visit Luke and Helen Wison?

We know from the Day by Day site that FDR never visited the Wilsons at their Bethesda estate. And the only correspondence that passed between them was when Luke Wilson wrote to FDR to offer their estate to the government. So it doesn't appear that FDR and the Wilsons knew each other personally.

Is this folktale true? And how did it get started?

Well, it's two-thirds true. FDR did design the Naval Medical Center and did pick the site for it. But he did not visit or know the Wilsons. It does make a good story though, and it sounds as if it should be true. Perhaps NIH staffers felt a little jealous that FDR was not personally involved in creating the Bethesda campus for NIH.

Read more about it: