Early Medical Instruments at the National Institutes of Health

The Stetten Museum preserves more than 3200 instruments in its collection. Because of limited space, only a small portion can be displayed. The following exhibit features a cross section of instruments for computing. Prior to the wide-spread introduction of solid-state electronics devices, scientific instrument designers relied on mechanical and optical techniques, which necessitated a high degree of precision in the construction of their instruments.

Many constituents of blood and other biological fluids can be measured by extracting components in the form of a gas. From the amount of gas released, the unknown amount of a substance can be calculated. This technique, known as gasometric analysis, was used effectively by Donald Van Slyke, who developed a gasometric analyzer that found extensive applications in science and medicine. The Lazarow Micrometric Gasometer, a descendant of Van Slyke's apparatus, was designed to test blood when only minute quantities were available, as is the case when working with infants or small animals. Arnold Lazarow developed this device in 1952 at the Western Reserve University, Cleveland, Ohio. 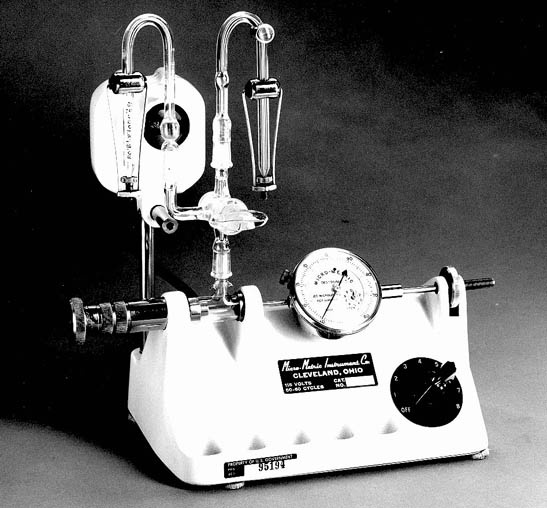 Surface tension has long been recognized as an important physical characteristic of fluids and colloids that can affect biological processes. Scientists sought ways to measure this phenomenon, but reproducible results were difficult to obtain. Two approaches, developed to measure this subtle force, are displayed here.

The process of drop formation by liquids is, in part, controlled by the surface tension of the fluid. To determine surface tension, the stalagmometer used a drop weight method, in which the number and weight of drops were compared to those from a reference liquid. Seemingly simple, the stalagmometer nevertheless required considerable skill and absolute cleanliness for readings to be meaningful.

This Curta calculating machine is a mechanical version of today's electronic hand-held calculator. It could add, subtract, multiply, divide, find square roots, and perform statistical functions. It was developed in Liechtenstein, a country noted for its precision mechanical instruments. This particular calculator belonged to Dr. DeWitt Stetten, Jr., founder of the museum. 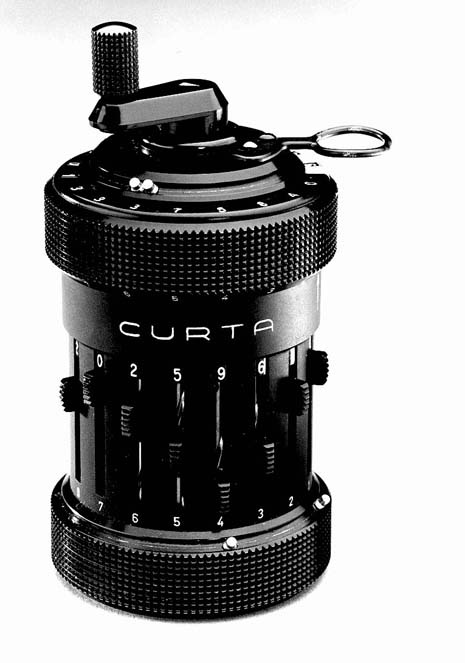 Light bends as it passes through transparent substances. An Abbe refractometer can measure the specific degree of this displacement, called the index of refraction. Because various substances bend light to different degrees, scientists use a refractometer to determine, for example, the amount of protein present in blood or urine. Refractometry has been used extensively in product testing and drug development. This particular type of refractometer was named after Ernst Abbe (1840-1905), a professor of physics and astronomy at the University of Jena. He later became the owner of the famous firm of Carl Zeiss, renowned for precision optical instruments. The piece shown in this exhibit is an American version of the original Zeiss model. 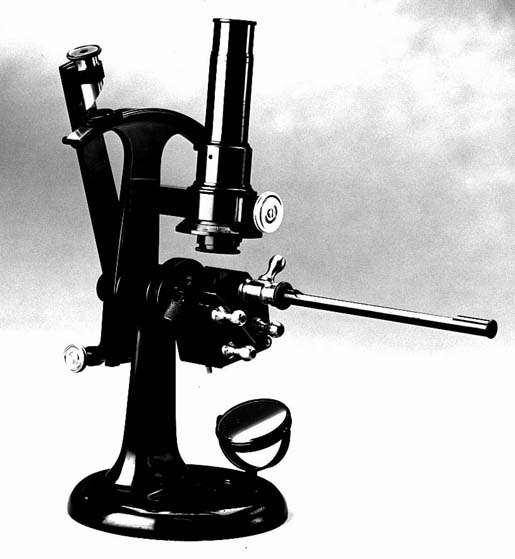 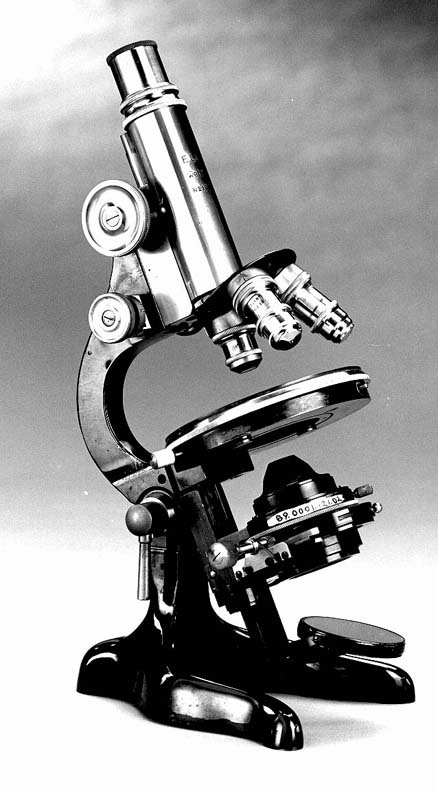 Originating in the 15th century, microscopes revealed the microscopic world. These instruments played such an important role in helping to explain the relationship between microorganisms and disease that they became symbols of scientific medicine. The earliest microscopes used a single lens. Attempts to improve the microscope led to designs using multiple lenses, however early compound designs were empirical efforts. In 1830, Joseph Jackson Lister, an English microscopist, developed a theory that provided the basis for rationale lens design. By 1880, progress in the design of lenses enabled light microscopes to reach their full theoretical resolving power.

The firm of E. Leitz manufactured this instrument. Used in both in Europe and the United States, it was donated to the Stetten Museum by Dr. Freddy Homburger, Cambridge, Massachusetts.

Some chemical compounds possess a distinctive color, such as the red of hemoglobin or the green of chlorophyll. One way of determining the concentration of a solution is comparing its color against a standard of a known concentration. Shown here is a type of colorimeter referred to as a Duboscq comparator. Notice that the two sample holders move independently, allowing one to match the intensity of the colors by varying the depth through which the samples are viewed. The concentration of albumin, blood sugar, calcium, hemoglobin and cholesterol could be determined with this device. A. Muller developed an early version of this device in 1853 and it was later refined by Jules Duboscq in 1870. 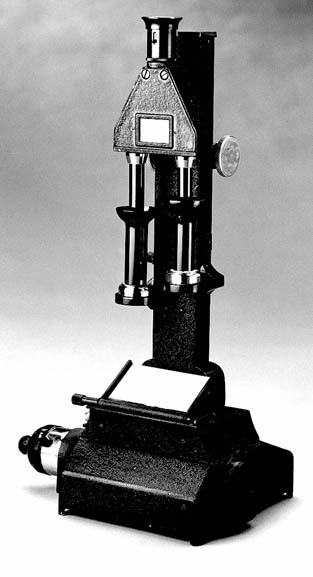 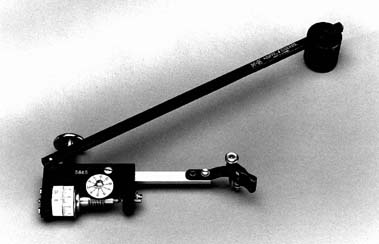 Engineers and cartographers normally use planimeters to find the area of an irregular shape, such as the area of a state; however, medical researchers also used this small instrument to measure biologic phenomena. Jakob Amsler, professor of mathematics at the University of Sscaffenhausen in Switzerland developed this instrument in 1854. It consists of two arms: one affixed to the page using a pin, the other containing a stylus used to trace around the unknown area. As the region is traced, a small wheel rotates against the paper, recording the area on a dial.

The Cenco-DuNouy tensiometer measured surface tension, expressed in dynes per centimeter, by determining the amount of force necessary to pull a platinum-iridium ring off the surface of a fluid. Developed in 1919 by P. Lecomte DuNouy at the Rockefeller Institute of Medical Research, this instrument reduced the difficulty of measuring surface tension and improved the reliability of results. 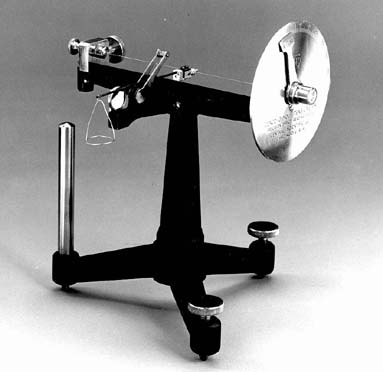 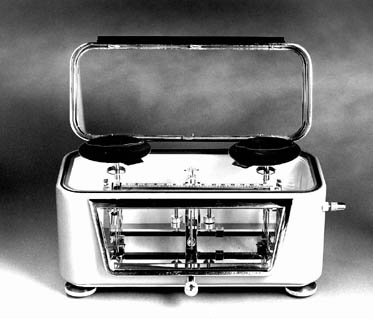 Precise measurement of mass is an essential task in scientific inquiry. Most weighing machines are called "balances" because they employ a beam balanced delicately on a central sharp edge (called the fulcrum). Unknown weight applied to one side pulls the beam off-center. The weight of the sample can be found by adding standardized weights to the other side until the beam is balanced. This torsion balance is novel in that it does not use a beam resting on a central fulcrum, rather the beam is suspended by taut metal bands. The weight of the unknown sample places a subtle twisting, torsional, force on the bands. Again, by adding known weight to the opposite side, the torsion is balanced, and the value of the unknown is determined. Nutritionists in the NIH Clinical Center used this particular instrument for many years to formulate special diets for patients.